Clifton Hill / HOCO Entertainment  will temporarily close all Attractions and Restaurant operations as a precautionary measure.

Effective End of day Tuesday March 17th  we will be temporarily closing until authorized to reopen.
We take the current situation very seriously and  want to ensure the health and safety of our guests and team members.
This action is consistent with the recommendations of the province’s Chief Medical Officer of Health related to the new precautionary measures for COVID-19.
Customers can continue to monitor our website, social media channels or contact us at  [email protected] for any questions they may have.

The world’s largest 3-on-3 basketball tournament will be making its first ever trip to Niagara Falls in Downtown Niagara Falls, ON. on Queen St.

The tournament is expected to host over 200 teams with more than 5,000 spectators in attendance over the course of the three days. The tournament will begin on Friday, September 22nd with early bird registration, and officially tip off the following day, Saturday, September 23rd with Opening Ceremonies at 8:00 a.m.; first round following immediately after.

Queen Street in Downtown Niagara Falls will be shut down from Sept. 22-24 to host more than 200 teams and 5,000 spectators.

The Gus Macker Tournament donates all of its proceeds to charity. The Canadian tournament will benefit Ronald McDonald House Charities South Central Ontario and Heart Niagara.

“We are very honoured to have been chosen as the charitable recipients of the Gus Macker Tournament,” said Catherine Bridgman, chief executive officer for Ronald McDonald House Charities South Central Ontario. “A third of the families we serve annually come from the Niagara Region, and we are so thankful to the wonderful community organizations that support us and help keep families close to their sick children.”

Early bird registration begins on Friday, Sept. 22. The official tourney tip-off and opening ceremonies are on Saturday, Sept. 23 at 8 a.m.

The tournament is open to anyone who wishes to participate. The cost for a four-man team is $116 U.S. dollars.

Entry forms and information can be found on the Gus Macker Canada website at www.gusmackercanada.com. 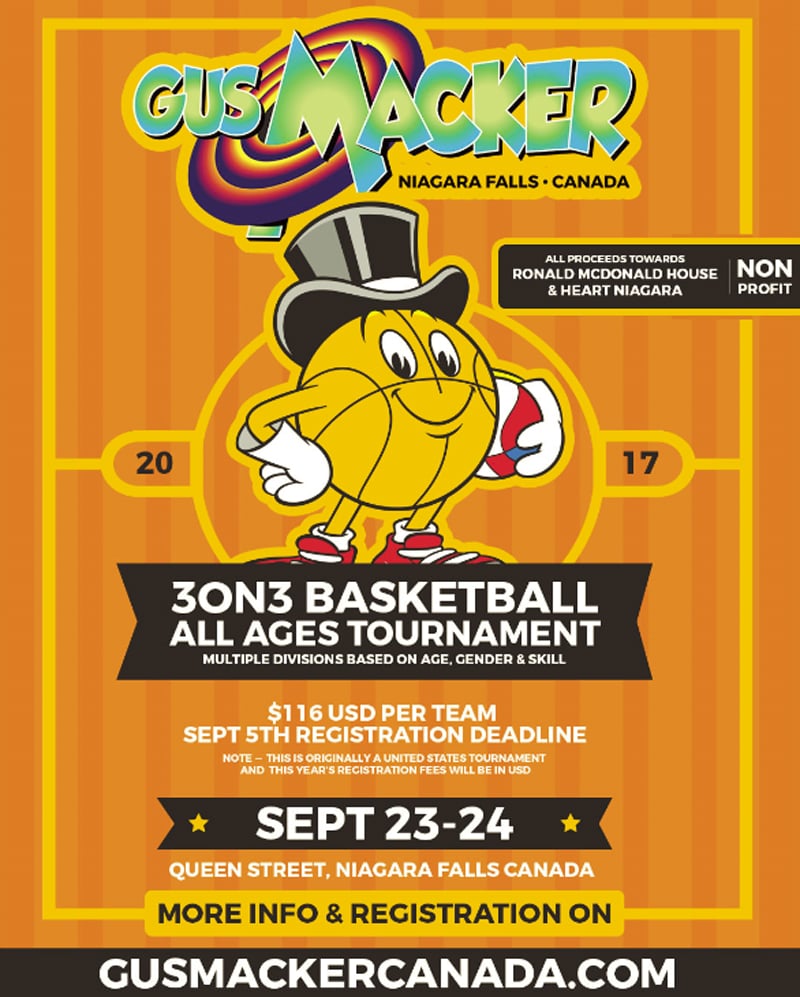