Clifton Hill / HOCO Entertainment  will temporarily close all Attractions and Restaurant operations as a precautionary measure.

Effective End of day Tuesday March 17th  we will be temporarily closing until authorized to reopen.
We take the current situation very seriously and  want to ensure the health and safety of our guests and team members.
This action is consistent with the recommendations of the province’s Chief Medical Officer of Health related to the new precautionary measures for COVID-19.
Customers can continue to monitor our website, social media channels or contact us at  [email protected] for any questions they may have.

Take some of the best and toughest ice-hockey players in the world, a sizzling atmosphere, stunning surroundings, tonnes of steel, a huge cooling system and thousands of square metres of frozen water. The result? Red Bull Crashed Ice! Since the first ever race back in 2000 Red Bull Crashed Ice has developed to become the most breathtaking winter sports events in the world. Ice-hockey aces hurtle down courses up to 500 metres in length in groups of four, shoulder to shoulder, as they fight it out for victory. The whole race is held on a steep downhill track dotted with chicanes, jumps and rollers. Pushing, sliding, sprinting and wrangling are all on the menu as the athletes race down the course, but the rules are, in fact, very simple: first to the bottom wins. Shaken, of course, but not stirred …

From Stockholm to Moscow, Davos to Prague, Quebec to Minnesota: Red Bull Crashed Ice has already played host to its fair share of insane action since the first event back in 2000. In 2009, it was Arttu Pihlainen (FIN) and Crashed Ice legend Jasper Felder (SWE) who triumphed in the races in Quebec City (CAN) and Lausanne (SUI) respectively, defying temperatures way below zero to fire up the huge crowds of up to 50,000 onlookers.

THE COURSE
Red Bull Crashed Ice promises to rock and awe with its epic features and proportions. Running 460 metres (1,509 feet) in length, an average width of 4.5 metres (15 feet), the Red Bull Crashed Ice course unfurls into a massive total of 2,500 square metres (26,910 square feet) of ice! The race will start under the gaze of the world’s famous 775-feet tall Skylon Tower and will conclude by one of the seven natural wonders of the world – Niagara Falls. The start gates are the first and last chance for skaters to enjoy the spectacular views of Niagara Falls and Buffalo, New York, as they’ll quickly be storming down Murray Street to the cheers of thousands of screaming fans.

FAN ZONE
Strategically located next to the course at the finish line, the Red Bull Crashed Fan Zone will open its doors from 6:00pm on Saturday, December 1, providing spectators with a privileged and unparalleled view of the competition, and an on-site ambiance that will leave no one out in the cold. DJs will be setting the tone for the evening and ice cross downhill aficionados will have all they need – music, beverages and hot food for sale, and private bathroom – to celebrate the victory of the first champion of the season until 11:00pm.

**PLEASE NOTE** THIS IS A FREE EVENT. TICKETS ARE FOR SPECIAL DESIGNATED AREAS ONLY.
Order your tickets now… space is limited! Tickets are available from $32.00 + HST and include access to the Red Bull Crashed Ice Fan Zone on December 1st, as well as a Red Bull beverage. Limit of four tickets per purchase. 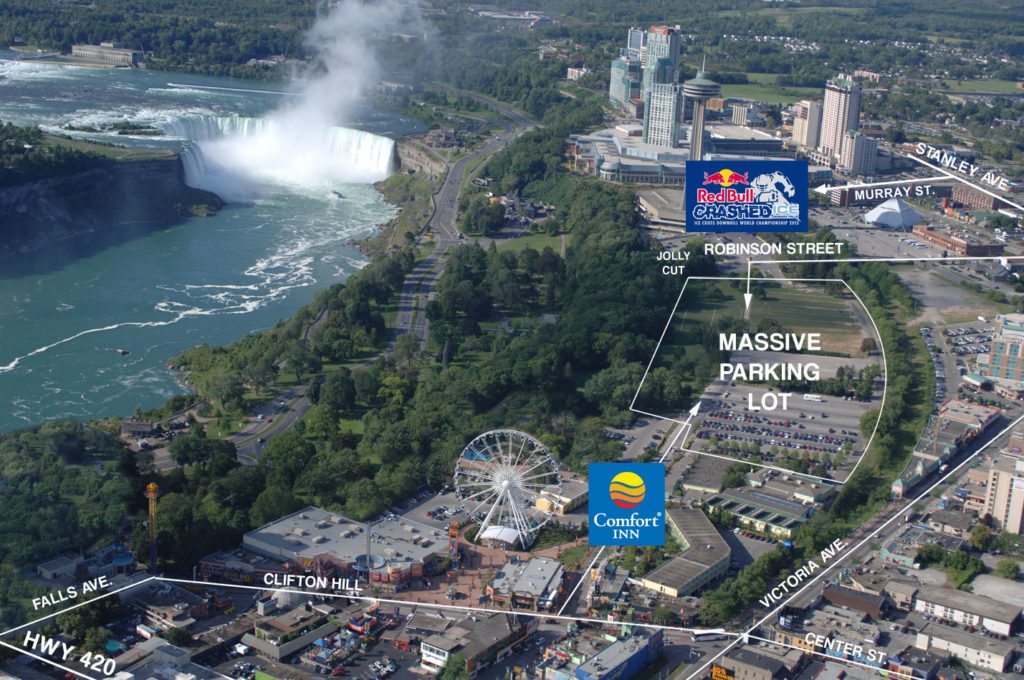