Almost every time I am traveling on the QEW from Toronto to Niagara Falls, my son will point out one of Niagara’s most prominent landmarks; “that abandoned ship”, the “Pirate Ship”, or the “Ghost Ship” as some refer to it as. He would ask me why that boat was just sitting there, and for the longest time I had no idea the significance behind it. “La Grand Hermine“, otherwise known as “The Big Weasel”, is located perched on the shoreline at the Jordan Harbour, just off the western shore of Lake Ontario, between Hamilton and St. Catharines.

La Grande Hermine is a replica of one of the 3 ships that Jacques Cartier used when exploring and the St. Lawrence river back in 1535. This is the largest one — measuring 140 feet long.  If this ship could talk, it would have a lengthy story to tell of where’s it been, and how it got here.

It was constructed in 1914 in Quebec and began as a ferry on the St. Lawrence, and later became a cargo ship, and then a floating restaurant. It was in 1991 that it was converted into a replica ship. This abandoned ship came to Jordan Harbour in 1997 with the intention of being turned into another restaurant or a gambling venue (there a different variations on this) by a businessman, who unfortunately passed away before he could see his dream come true. He was awaiting permission, along with lacking the funds to have it be used in Niagara Falls, which is why the ship was docked at Jordan Harbour for so long. Then in January of 2003, it was the victim of an arson fire. Luckily, the entire La Grande Hermine didn’t go up in smoke, and its damaged and “rustic” look actually adds to photographs and gives it more wonderment behind the history of this curious “shipwreck”. It is now a distinctive Niagara landmark and favourite roadside attraction to many people. There have been a few people that have showed interest in purchasing it and restoring it for various reasons, but for one reason or another La Grande Hermine is still awaiting its SOS call to be answered…

This curious landmark tilts strongly to one side as it half sits and half floats, only a few metres off the shoreline.
If you wish to see for yourself this piece of Niagara history, next time you are traveling into Niagara Falls make sure you stop at Jordan Harbour and take a peak. There is no cost to visit La Grand Hermine, and it makes for beautiful photos.

Here’s some more story and closer footage of the vessel that CHCH News covered: 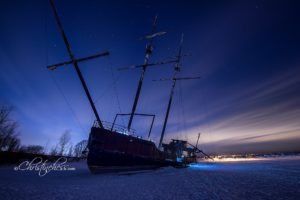