The newly named “Rainbow Bridge” designed by architect Richard (Su Min) Lee, was positioned 500 feet (168m) north of where the “Honeymoon Bridge” once stood, making it 1000 feet north of the American Falls. To avoid the same mishap from occuring, the abutments and approach spans rest on solid rock high enough on the sides of the gorge. The abutments are located 50 feet from the rivers edge and 50 feet above the surface of the water. 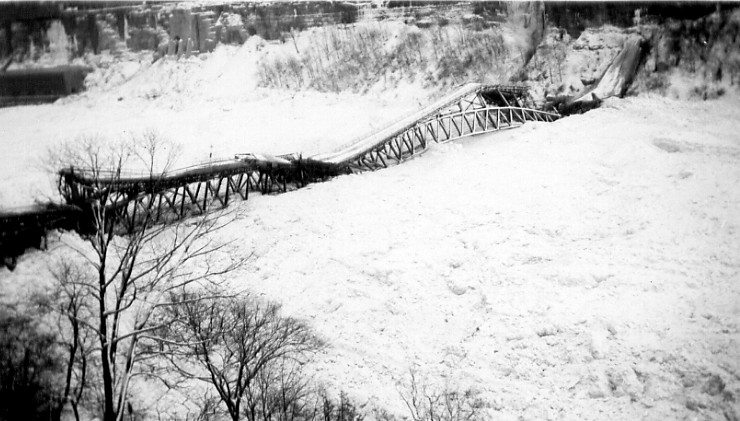 *The original Homeymoon Bridge after it collapsed*

Approximately 3500 tons of steel were used in the two ribs and 2000 tons of additional steel in the superstructure and decking. A closing section of steel measuring approximately 11 inches was used to join the 475 foot sections extending from each shore. The final product of the Rainbow Bridge is a deck of 202 feet above the water surface and it is 1450 feet long. There are two 22 feet wide roadways separated by a 4 foot wide median. There is a 10 foot wide sidewalk along the south side of the bridge facing the Falls.

On November 1st, 1941 the official opening of the Rainbow Bridge took place. Currently, no commercial trucks are permitted to use the bridge and they are encouraged to take the Queenston-Lewiston Bridge located approximately 16 km to the north. The Rainbow Bridge is one of the faster international bridges crossing the two borders with 16 car inspection lanes into the U.S. and 15 car inspection lanes into Canada. Tour bus lanes are designated and pedestrains are permitted on the Pedestrian Walk Way.

If you plan on crossing the border, it’s best to check out the Niagara Falls Bridge Commission website by clicking here. It will inform you of wait times, any lane closures and there is even a traffic camera for you to view the border crossings of not only the Rainbow Bridge, but the Queenston-Lewiston, Whirlpool and Peace Bridge as well!

Open from 7:00am to 11:00pm daily, the Niagara Duty Free is on the Canadian side of the Rainbow Bridge and is located at 5726 Falls Avenue, just adjacent to the Rainbow Bridge, across from Casino Niagara. Alcohol, fragrance, cosmetics, clothing, accessories and sweets you will find here at great discounts and there is no toll into the U.S. side, saving you further money. For a Customs and Allowances Quick Chart on alcohol and tobacco click here. 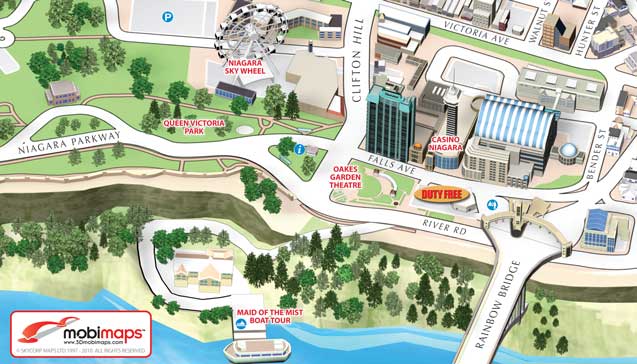 From Downtown Niagara Falls, ON.:

Cross the Rainbow Bridge and follow signs for the I-190. Take I-190 North (Lewiston) and EXIT 22 South, then first left.

For additional information on crossing the border and what documents are needed and even links on how to obtain a visa, etc. click here.

Save $15 Off 3 Top Attractions